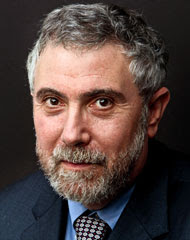 It’s easy to get confused about the fiscal thing, since everyone’s talking about the “fiscal cliff.” Indeed, one recent poll suggests that a large plurality of the public believes that the budget deficit will go up if we go off that cliff.

Let’s get one thing straight: America is not facing a fiscal crisis. It is, however, still very much experiencing a job crisis.

In fact, of course, it’s just the opposite: The danger is that the deficit will come down too much, too fast. And the reasons that might happen are purely political; we may be about to slash spending and raise taxes not because markets demand it, but because Republicans have been using blackmail as a bargaining strategy, and the president seems ready to call their bluff.
Moreover, despite years of warnings from the usual suspects about the dangers of deficits and debt, our government can borrow at incredibly low interest rates — interest rates on inflation-protected U.S. bonds are actually negative, so investors are paying our government to make use of their money. And don’t tell me that markets may suddenly turn on us. Remember, the U.S. government can’t run out of cash (it prints the stuff), so the worst that could happen would be a fall in the dollar, which wouldn’t be a terrible thing and might actually help the economy.
Yet there is a whole industry built around the promotion of deficit panic. Lavishly funded corporate groups keep hyping the danger of government debt and the urgency of deficit reduction now now now — except that these same groups are suddenly warning against too much deficit reduction. No wonder the public is confused.
Meanwhile, there is almost no organized pressure to deal with the terrible thing that is actually happening right now — namely, mass unemployment. Yes, we’ve made progress over the past year. But long-term unemployment remains at levels not seen since the Great Depression: as of October, 4.9 million Americans had been unemployed for more than six months, and 3.6 million had been out of work for more than a year.
When you see numbers like those, bear in mind that we’re looking at millions of human tragedies: at individuals and families whose lives are falling apart because they can’t find work, at savings consumed, homes lost and dreams destroyed. And the longer this goes on, the bigger the tragedy.
There are also huge dollars-and-cents costs to our unmet jobs crisis. When willing workers endure forced idleness society as a whole suffers from the waste of their efforts and talents. The Congressional Budget Office estimates that what we are actually producing falls short of what we could and should be producing by around 6 percent of G.D.P., or $900 billion a year.
Worse yet, there are good reasons to believe that high unemployment is undermining our future growth as well, as the long-term unemployed come to be considered unemployable, as investment falters in the face of inadequate sales.
So what can be done? The panic over the fiscal cliff has been revelatory. It shows that even the deficit scolds are closet Keynesians. That is, they believe that right now spending cuts and tax hikes would destroy jobs; it’s impossible to make that claim while denying that temporary spending increases and tax cuts would create jobs. Yes, our still-depressed economy needs more fiscal stimulus.
And, to his credit, President Obama did include a modest amount of stimulus in his initial budget offer; the White House, at least, hasn’t completely forgotten about the unemployed. Unfortunately, almost nobody expects those stimulus plans to be included in whatever deal is eventually reached.
So why aren’t we helping the unemployed? It’s not because we can’t afford it. Given those ultralow borrowing costs, plus the damage unemployment is doing to our economy and hence to the tax base, you can make a pretty good case that spending more to create jobs now would actually improve our long-run fiscal position.
Nor, I think, is it really ideology. Even Republicans, when opposing cuts in defense spending, immediately start talking about how such cuts would destroy jobs — and I’m sorry, but weaponized Keynesianism, the assertion that government spending creates jobs, but only if it goes to the military, doesn’t make sense.
No, in the end it’s hard to avoid concluding that it’s about class. Influential people in Washington aren’t worried about losing their jobs; by and large they don’t even know anyone who’s unemployed. The plight of the unemployed simply doesn’t loom large in their minds — and, of course, the unemployed don’t hire lobbyists or make big campaign contributions.
So the unemployment crisis goes on and on, even though we have both the knowledge and the means to solve it. It’s a vast tragedy — and it’s also an outrage.

A version of this op-ed appeared in print on December 7, 2012, on page A39 of the New York edition with the headline: The Forgotten Millions.